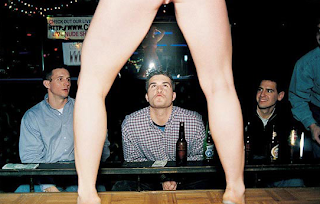 "An escort did an illegal sexual act on me during her paid service to me. I had almost gotten arrested. I would like the court to close the business. I also would like to get my $275 payment back and a $1.8 million verdict for the tragic event that happened." - the actual words from legal papers filed by college student Hubert Blackman. Let's review how this "tragic event" went down: Hubert was vacationing in Las Vegas. He called escort company Las Vegas Personals and ordered a stripper to his room. The woman gave Hubie a lap dance and striptease for $155 and a "sex act" for $120. The next morning, our buy Hugh had a little buyer's remorse and called Las Vegas Personals, demanding they refund his money because his escort left before the full hour he had paid for was over. When the company refused to give him a refund, Hubert...wait for it...wait for it...called the police. The PoPo told him that he could get arrested for soliciting a prostitute, at which point Hugh decided to file the law suit referenced above, claiming that he now has a "mental condition" due to the incident. Ha, yeah you do, Hugh. It's called TJS -- Total Jackass Syndrome. Even better, he claims that he was incapable of consenting to his agreement with the stripper because he was drunk. Drunk in Vegas while hiring a stripper? Stop it. This story is so awesome that I can't decide which is the best part: that Hugh tried to get a refund from an escort service, that he called the police, or that he used the phrase "an escort did an illegal sexual act on me" in a legal document. Tough call. I hate to tell you, Hughie, but I don't think any judge is going to agree that an abbreviated blow job qualifies as a "tragic incident." But hey, maybe there's precedent here for $1.8 million blue balls. I hope so, because I'd hate to think that Hugh might be trying to capitalize on his own idiocy. That never happens in this country, right? Nah.
Posted by Renée Z. at 9:18 AM