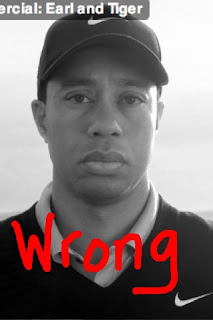 Oh, Tiger. Tiger, Tiger, Tiger. I was hoping it wouldn’t come to this. I’ve resisted the urge to mention him in this space many times. I’ve been quiet through all the mistresses, however many of them there have been. I lost count at six. I’ve been quiet because, the truth is, while I read all the “news” about Tiger and his special friends, I’m not really interested in celebrities’ infidelities. Don’t get me wrong; it’s not that I’m not interested in things that have nothing to do with me. Please. I have a subscription to Us Weekly, okay? But I just don’t care if Elin is wearing her wedding ring or not, and I don’t care if they get divorced or back together. I don’t care what goes on intimately between two people unless I am one of them. And, I know I am in the minority here, but I have not been intimate with Tiger Woods. So I haven’t had anything to say about him. Then I saw his new Nike commercial.
The commercial. WOW. Really, Tiger? I mean, I am one of the few people in the country who didn’t care about his prolific, seemingly indiscriminate cheating – and this is despite having read those, um, graphic text messages. Do you think it was the athlete in him, the competitor, who thought “Hmmm. Some people don’t hate me yet. I’ll show them?” It had to be. In case you haven’t seen the commercial, it’s 33 seconds of Tiger staring directly into the camera and looking sad while the voice of his dead father says "Tiger, I am more prone to be inquisitive to promote discussion. I want to find out what your thinking was. I want to find out what your feelings are, and did you learn anything?" Let me just back up for a minute in case you missed it: the commercial features THE VOICE OF HIS DEAD FATHER. Now, if Nike had actually managed to get Tiger’s dead father to speak in the spot, that would be impressive. Nope. While Nike is pretty powerful and Tiger pretty wealthy, their combined supremacy did not in fact bring Earl Woods back to life. Nike copped the voice clips from a 2004 three-DVD authorized biography of the golfer. Awesome, right? The words that Earl spoke in support of Tiger’s athleticism can also be applied to Tiger’s pathological philandering! How serendipitous! Every father's dream, I am sure.
Okay, so, the whole thing is gross. One might expect that Tiger’s grossness meter had maxed out by now, but no. Thank you, Nike, for going that extra mile and creepily invoking both Tiger’s best crybaby face and his dead father to make me really squirm. Well played. But before I address the grossness of it all, can we please discuss how freaking hilarious Earl’s questions are in this particular context? I mean, COME ON. There had to have been at least one guy at the advertising company with a brilliant sense of humor. I mean, “I want to find out what your thinking was???” Uh, okay, Earl, you must be dead if you have to ask. And “did you learn anything?” Yeah he did. He learned he can’t drive while doped up on Ambien. He learned Elin sure can swing a golf club. He learned that if your mistress has a headshot, she’s probably going to rat you out. And he learned that shocking the American public with the extent of your promiscuity costs a lot of money in lost endorsements.
Nike, as you may know, is the only major endorsement Tiger has not lost after his scandalicious year. So, really, this is more about Nike than Tiger. They have put a lot of money into Mr. Woods, and they are sticking by him. I get it. They want us to know that while they support him, it is only in a deeply reflective context. Right. Whatever, Nike. In the company's and Tiger’s joint desperation to salvage the money making machine that is Tiger Woods for Nike, they managed to shamelessly disrespect a dead man’s words while creating what is both the most offensive and most hilarious commercial I have seen in a while. I’d give them props for that last part if I thought it were intentional and if I weren’t otherwise so horrified. Because, all jokes aside, I’d like to think there is a limit to what we’ll tolerate from corporations and celebrities. And, personally, I can get past Tiger’s cheating – I’m not married to him. But I can’t get past the use of a dead man’s voice to try to neutralize a sex scandal for profit. Shame on you, Nike. I’d stop buying your sneakers if I actually ran or played basketball or did any of that sports stuff you people are into. And shame on you, Tiger. You’ve probably heard that a lot this year already, haven’t you? So let me also say, for lack of a better word, just...yuck.
Posted by Renée Z. at 6:01 PM