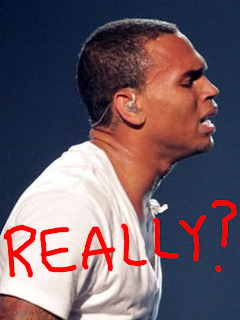 You've probably heard by now that Chris Brown cried during the BET Awards broadcast Sunday night. In case you didn't see his emoto-show, I'll summarize: Brown performed in honor of the anniversary of Michael Jackson’s death; he danced brilliantly to an MJ medley; he began singing “Man in the Mirror,” choked up, stopped singing, fell to his knees, shook his fist in the air and wept while the audience sang the song for him. Very dramatic, right? By Monday morning, of course, the blogs were buzzing with speculation about whether Brown’s tears were real or fake, whether they were in tribute to MJ or to show Brown’s contrition for the Rihanna incident. Each headline on the topic was basically identical to another. "Are we ready to forgive Chris Brown?" "Have you forgiven Chris Brown?" "Should the public forgive Chris Brown?" "IS IT TIME TO FORGIVE CHRIS BROWN?" Well, I don’t know about you, but Jermaine Jackson thinks it’s time. After the BET show, Jackson said, “People make mistakes, they need support, and he’s a wonderful performer.” Um, listen, JJ: you named your son Jermajesty. Jermajesty. So I can't take you seriously. And, more to the point, I am sick and tired of hearing about forgiving Chris Brown.

When Brown surfaced in 2005 with his first album and the single “Run It,” I was a huge fan. Seriously, and feel free to judge me on this statement alone, but I love that song. There were days back in the sweet innocence of ’06 when I nearly drove off the road listening to “Run It” in the car. And then, three years later, Brown beat up Rihanna, and that was it for him and me. It wasn’t a deliberate decision. It’s just that ever since I read about the incident, when I hear Chris Brown all I see is Chris Brown punching Rihanna. It’s involuntary. Sorry, Jermaine, but I tend to avoid music and people that make me wince. Also, after the incident, Brown unrolled the worst PR performance in the history of celebrity falls from grace. His apologies were late and entirely unconvincing. He complained during interviews and on Twitter about radio stations not playing his music. And then, in his most brilliant move since the fateful night, he Tweeted, “the [music] industry can kiss my ass.” It didn’t seem to me that Chris Brown was asking for forgiveness. This is all to say that I’m not in control of whether or not I forgive Chris Brown – he is. But, more importantly, who cares? Who cares if I forgive Chris Brown or if you do or if the person next to you does? What matters is that Rihanna and Chris Brown forgive Chris Brown. The question the media should be asking is, “Why did it happen?” What are the events and circumstances that put two young people in the positions in which Brown and Rihanna were? If we are going to put this sort of horror on display, we should get something progressive from it. So anyone who really cares enough to be mad at Chris Brown in the first place should be talking about why – and that includes Brown himself.

I’m not opposed to forgiving Chris Brown. I don’t think it matters, and I don’t think it’s likely, but I am most certainly not opposed to it. The BET Awards stunt isn’t going to get me there, though. If Chris Brown wants to use an emotional breakdown to persuade us to give him money (and let’s just be honest, that's what's really going on here), then he should tell us why -- why it happened, why he couldn't stop, why he shouldn't make me cringe. I’m not saying he owes the public that. He has every right to not tell us why. I have every right to not support his career. And you have every right to care or to not care. It’s pretty simple in that sense. So, Jermaine Jackson, please don't talk to me about forgiving him. Mind Jerbusiness and let Brown speak for himself.
Posted by Renée Z. at 6:47 PM