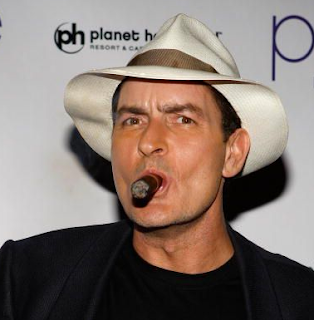 At 2 a.m. last night, police arrived at New York's Plaza Hotel to find Charlie Sheen naked and unconscious in a trashed room complete with upended furniture and a broken chandelier. Oh, and he was drunk. Rock 'n' roll!  Sheen got out of rehab two months ago and is in New York with his ex-wife and two young daughters. That's nice. Oh, just for fun, let's all remember that this clown makes TWO MILLION DOLLARS AN EPISODE on that crapfest -- I mean show, Two and a Half Men. Yeah.

UPDATE: Radaronline.com reports that there was a prostitute there, too. And she said Sheen was bogarting all the coke. I'm not joking. It seems Chuck got a little paranoid, accused the young lady of stealing his wallet, and then went nuts on the furniture and chandelier. I guess his kids had a separate room.

UPDATE #2: Radaronline now reports that Sheen is checking into -- say it with me, people -- REHAB!
Posted by Renée Z. at 8:51 AM