In Other News, Dubya and Ke$ha Are Dating 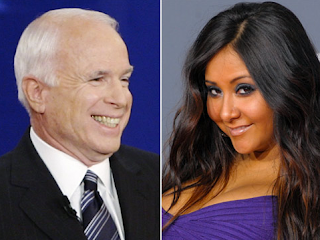 "Happy birthday @Sn00ki!" - the message that Senator  and DADT supporter John McCain left on Twitter yesterday for Snooki. Johnny's and Snooki's love affair began when the Guidette told Meghan McCain that she voted for her dad because he's "cute," and McCain later said that Snooki was "too good looking to go to jail." Now it's so serious that McCain takes time off from oppressing homosexuals to send the reality TV star birthday wishes -- which is cool. Because everyone knows that talentless famewhores whose shows support misogyny and alcoholism are good and people who want to both serve their country and love whom they want are bad. Duh.
Posted by Renée Z. at 12:23 PM