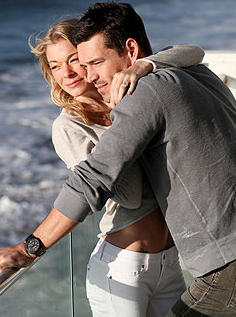 What do you get when you cross a philandering D-list actor with a cloying, callow country singer? You get the Rimes-Cibrians! Leann Rimes and her boyfriend Eddie Cibrian are engaged, as evinced by the NOT AT ALL POSED candid photo above. A source tells Us Magazine that Brandi Glanville, the wife whom Eddie left for Leann, "couldn't care less." Yeah, I think you speak for the rest of the world, BGlan. [People]

This was AFTER the dog ate her homework: Sarah Palin explains her most famous made-up word, "refudiate," on the latest episode of her apocalyptic crapfest "Sarah Palin's Alaska." Quoth SPal, "I pressed an F instead of a P and people freaked out." Sure you did, Punkin. [Huffington Post]

Yeah, bravery and social change are so silly: 72 year-old actor Richard Chamberlain told The Advocate that he "wouldn't advise a gay leading man-type actor to come out." Explains the miniseries king, "...it's just silly for a working actor to say, 'Oh, I don't care if anybody knows I'm gay' - especially if you're a leading man." Yeah, almost as silly as taking advice from Richard Chamberlain. With all due respect to the miracle that was "Shogun," I ask that you kindly stuff it, Ricky. [TMZ]

My ovaries have gone into hiding: UsMagazine.com is currently running a slideshow called "The Year In Teen Mom." The feature contains highlights from the first season of MTV's most recent strike against society. And just in case the idea of celebrity via premature parenthood isn't enough, Bristol Palin is there, too, explaining that she is "trying to be a role model for teens and show them the importance of contraceptives." Thanks, BPal. I'm sure all the money and fame afforded to you and the "Teen Mom" cast really drive home the pitfalls of unsafe sex. [Us]
Posted by Renée Z. at 10:04 AM