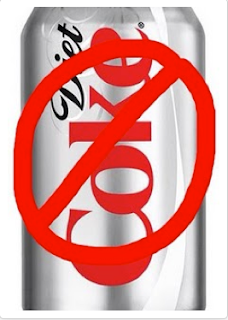 My longstanding rage at the Coca-Cola company just got a little jumpstart from Sadie at Jezebel, who authored a post today about the shady business behind Vitamin Water. In honor of Coca-Cola's nonstop suckfest of corporate responsibility, I present two oldies but goodies from the early days of F-Bomb Café. Enoy. And then get mad. Cool? Here you go:

Originally published in February and March of 2010:

BUYER, EATER, AND DRINKER BEWARE
When I was in high school, I drank almost two liters of Diet Coke every day. Don’t ask. If you really want to know why, go to the archives and read “Counting Crackers.” If, like me, you prefer to know as few details as possible about other people’s lives, suffice it to say that I drank a lot of Diet Coke. In college, I found out that NutraSweet was causing 90% of the crippling migraines I had suffered for nearly a decade and that the citric and phosphoric acids in my precious Diet Coke were literally burning a hole through the lining of my stomach. Needless to say, or maybe not, I stopped drinking Diet Coke. Migraines and ulcers can be kind of a drag. I mean, unless you’re into that sort of thing, in which case, cheers!

It never occurred to me to be outraged at Coca-Cola for selling me a product that was slowly killing me – or at least leading me to a life of chronic pain. After all, it was I who chose to drink two liters a day of something created in a lab. Just because it is calorie-free does not mean it is a health food. We all know that, right? I was a victim merely of my own bad choice, right? Maybe. Maybe not.

I haven’t paid much attention to Diet Coke in the years since our breakup (like with so many other scorned lovers, I am reminded of our love affair now and then by burning sensation in my gut), but a new commercial managed to grab may attention. During the Olympic broadcast today, I heard a Diet Coke commercial mention something about Diet Coke’s new “Heart Truth” campaign. I went to the website, where I read this:

A healthy, happy heart is essential to staying extraordinary and making the most of every moment. Diet Coke and The Heart Truth are partnering to raise awareness for women’s heart health programs. Join us to show your support and be inspired daily.

Okay, to be fair, nowhere does Diet Coke claim that it is good for your heart. And, in fact, I am not sure that Diet Coke itself is in any way bad for your heart. But just one week before these “Heart Truth” ads began, The New York Times reported that researchers have linked diet soda to metabolic syndrome – the greatest risk factor for heart disease. While the research determines only a correlation, not a cause/effect relationship, they found a relationship nonetheless. Somehow I doubt the timing of the campaign is unrelated to this report. And even if Diet Coke is not directly bad for one’s heart, I know what large doses of it did to me, and I know that it is proven to be linked to kidney stones and kidney disease. So I guess the question is, at the very least, which of your organs do you like best? Diet Coke wants you to embrace your heart but tell your kidneys to get lost. Which is cool. I mean, we have two. And there’s always dialysis.

Here’s the thing: we know that Diet Coke is trying to market itself as healthful. So, can one blame Coca-Cola when she realizes it in fact is not? I don’t know. I read last week that two women are suing Jillian Michaels because Michaels’ product “Jillian Michaels Maximum Strength Calorie Control” didn’t help them lose weight. The product is a supplement containing primarily caffeine, guarana, glutamine, and ginger. Users are told to take two pills before meals. That’s it! Two pills and you’ll lose weight! Come on, now. Part of me is angry that our courts are taken up with litigious whiners who have ridiculous expectations and sue people for capitalizing on their laziness. But part of me thinks people like Jillian Michaels – experts who knowingly endorse worthless products – are dangerous and need to be penalized for their malevolent irresponsibility.

I’m not going to sue Diet Coke because every once in a while I have to take a few weeks worth of Prevacid. But I don’t buy any Coca-Cola products. And let me tell you, I was pretty addicted to Vitamin Water until I found out that Coke owns it. Likewise, I’m not going to watch “The Biggest Loser” or buy any of Jillian Michaels’ exercise DVDs, either. Because while there needs to be legislation in place that protects consumers from false claims, especially where our health is concerned, we as consumers need to be educated and selective about what we buy and whom we support. Don’t let Diet Coke tell you how to be healthy, and don’t let someone who makes a living humiliating obese people on national television lie to you about weight loss. Think about the logic of taking health advice from anyone other than your health practitioner. Your kidneys will thank you.