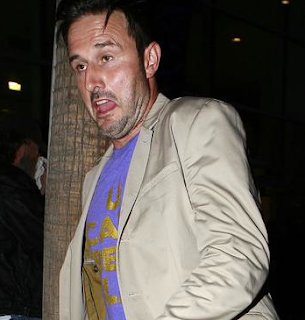 I'm not sure why David Arquette checked into rehab. Judging by a report in The New York Post, Arquette was nothing but AWESOME on his last night before checking in. I mean, if this behavior is wrong, I don't want to be right:

"Another source told us that Arquette showed up at a year-end party thrown by millionaire Wayne Boich in Miami, where he told fellow guests his face was a mess 'from doing the worm.' He'd earlier appeared at club Liv, wearing a mask that he never removed. Spies said he seemed "wobbly and incoherent" while partying with a group of dwarfs."

Excellent. I'm less concerned about DArq's addicitions than I am about Los Angeles in general, where one can show up at a club, do the worm, smash up his face, and "party with a group of dwarfs" without intervention. That whole city needs rehab. Which reminds me. Book tickets to LA...
Posted by Renée Z. at 8:38 AM