There Were So Many Options For This Title 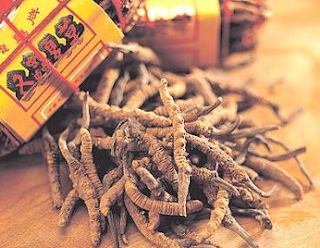 "Worm For Your Worm" and "Putting The Dong In Dong Ching Xia Cao" were the front runners, but really the best title is "Stupid Rich Dudes Just Got Stupider." Let's go with that one. With that settled:

The New York Post reports that men are paying $800 an ounce for Himalayan, fungus-encrusted silkworms. Called dong ching xia cao, the insects' dead, encrusted bodies promise viagra-like effects. Of course, there is no evidence that the worms work (which is also the problem they are purported to solve, coinicidentallly -- ba-dum-bum). But, unlike other, inferior products designed to help improve sexual performance, this one promises child labor and meaningless violence. Awesome! Viagra-schmiagra! According to the Post, "The infected worms are picked by peasants during the summer in isolated villages along the Annapurna trail. Schools shut down for the lucrative picking season so children can join the hunt for the expensive aphrodisiac. Competition for the cash crop between remote mountain towns has turned bloody, with mobs murdering poachers." Ah, whatever. Kids, murder, blah, blah, blah. Boners for life!