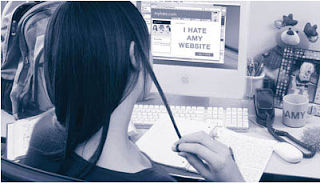 "As you may know, I am a huge whore. I love dick so much." - the "About Me" statement on the Facebook page created by two Florida high school girls using a classmate's name. Oh, girls! In addition to the "About Me" blurb, 16 year-old Taylor Wynn and 15 year-old McKenzie Barber posted pornographic images of their classmate by Photoshopping the victim's head onto a nude, prepubescent body with an erect penis next to her face. Sugar and spice and everything nice! As a result of the fraudulent Facebook page, which accumulated over 180 friends, the victim was teased maliciously at school. When Wynn's mom asked her why she tormented the victim, the teen replied, "Because nobody liked her" and said it was because she thought it would be "a funny joke." You were right, Taylor. It's totally hilarious. If hilarious means horrifying. Winn and Barber have been charged with cyberstalking.

Here's the thing: none of this is surprising or new. And while most are probably relieved to see that the girls are facing serious charges, the charges don't address the real problem, which, unfortunately, is not as simple as two nasty teenagers. We're the problem -- the grown-ups. Yeah, you. Okay, maybe not you. But I can think of a bunch of public figures to whom I'd serve a piece of the culpability pie. Of course one questions the parents' responsibility in situations like these, but I have no idea what went on in either of those girls' houses. I do, however, know some of what goes on in the world around them. To wit, here's another oldie but goodie from the column archives. This one's for you, Taylor and McKenzie. Be better.


WHEN GIRLS ATTACK
Remember when kids bullied each other in person? Ah, those were the days. It was so much simpler when a girl was tripped in the lunchroom or pushed into the lockers, wasn’t it? Now, with all the fabulous new social networking sites out there, the bully has to choose his or her forum. Should I start a Facebook hate page or a name calling thread on Formspring? Twitter rant or MySpace assault? So many social networks to choose from, so much hate, and so little time. It’s hard out there for a mean girl. And it is the girls who seem to be causing all the trouble these days.
It must be the bevy of new sites where it’s easy to intimidate, harass, and talk plain ol’ smack about a person, because girls aren’t content with just an eye roll or the silent treatment at lunch anymore. They’re getting uglier and dirtier. Much has been written lately about the seeming spike in girl bullying, and the connection between this bullying and online social networks is a particularly hot topic. The New York Times published an article last week about Formspring and bullying in which one teenage girl said of the website’s posts, “In seventh grade, especially, it’s a lot of ‘Everyone knows you’re a slut’ or ‘You’re ugly.””  Later in the article, the mother of a teen explained what she saw in her daughter’s Formspring account, saying, “The comments are all gross and sexual.” I don’t know how much blame should be assigned to Formspring and Facebook and how much to parents – I do know that the psychosocial reasons why kids and teens bully each other are many and complicated. So I am not going to get into that whole thing. I would like to ask one question, though: is anyone really surprised? Girls are competing viciously. They’re attacking each other’s appearances and sexual behaviors. Um, of course they are. It’s no wonder that the graphic suggestions, ruthless insults, and angry intimidations are spilling from their fingers like so many OMGs and LOLs.  If they have eyes and ears, our girls are provided endless instruction on how to insult and hate other girls in the ugliest ways possible. There are cruelty classes everywhere they turn.
Print magazines, for one, do a great job of inciting nastiness among girls (see “Who Wore it Best” in Us Weekly or "Worst Bikini Bodies" in Star), but the real tutorial on hazing and slander is reality TV. It’s basically graduate school for bullies. I’m not talking about obvious girlfight spectacles like “The Bad Girls’ Club” or “The Real World.” I’m talking about the ostensibly more civilized shows like “The Bachelor.” Just think about “The Bachelor” for a minute. Twenty-five women compete on film for the affection of one man. On at least every other episode, one of the women pulls the bachelor aside to rat out another girl who is allegedly sleeping with someone else/hiding a secret past/really just a total b**ch. And when the man is not around, the women like to make each other cry. But, actually, “The Bachelor” looks like charm school compared to “The Real Housewives.” That show is 60 minutes a week of women hating each other for a living. Don’t get me wrong; I have enjoyed some episodes of this franchise in my day. There is something frighteningly hypnotic about a bunch of Botox-happy rich chicks competing in the Narcissism Olympics. It shouldn’t be entertaining, though, because these shows are dangerous given what they model for young girls.  Last season on the New Jersey version, Teresa called Danielle a “prostitution wh**e” before flipping over a table in her direction. In Orange County, Tamra forced alcohol on Gretchen at a dinner party to get her “naked drunk” in the hope she would embarrass herself. Oh, and, later, Tamra announced to everyone that there are naked internet photos of Gretchen. Let’s not forget New York, where the other housewives laughed at Ramona as she walked in a fashion show. They later traded snarky comments about how awful she looked. Hmmmm, sound familiar? I can’t imagine where teens are getting “Everyone knows you’re a slut” and “You’re ugly.”
There is definitely a bullying problem on websites like Formspring and Facebook, and it is certainly shocking to hear about such cruelty from young girls. I hope people continue to pay attention and think about better ways to help teens navigate the toxic combination of hormones and insecurity. But in the meantime, let’s take some ownership, grown-ups. I’m not preaching – I’m as guilty as anyone. I’ve watched marathons of the housewives. Marathons. But what are we encouraging in the media? What do we model and allow to be modeled for girls? How much cruelty do we laugh at every day? Give it some thought. We can’t expect the kids to change if the adults don’t. And if you are a young girl, please don’t accept the reality on these reality shows. You can be better. Please, please be better. In the name of all that is good and holy, I am begging you. BE BETTER.