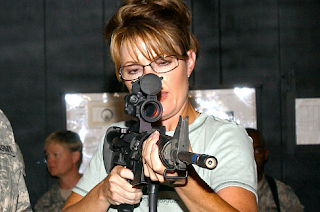 "Beware of what's coming. I really do believe that God has shed his grace on thee. We can't blow it. We can't allow an atrophy of the foundation that is America, that is so exceptional." - Sarah Palin, speaking at the Safari Club International's annual convention in Reno. Um, I think Sarah is warning that God is unhappy with us, but as usual she is speaking in Palinese -- otherwise known as barely literate rhetoric. Seeing as how Safari Club members like to kill animals for sport, I didn't attend the conference, but Andrew Romano at The Daily Beast offers an outstanding review of Palin's speech. There are so many awesome ramblings of an idiotic narcissist -- I mean, quotations from Palin's appearance -- that it's hard to pick favorites. But I think I can narrow it down to two more:

"Trig, I pull the Trig-ger."  (explaining how her son Trig got his name) What a great idea! Nothing says newborn baby love like shooting stuff.

"Imagine, though—imagine making life even more miserable for the liberals who want that gun control? Here's how I figure it. Remember that weird guy in Wisconsin was so angry, so upset, watching a Palin win slot after slot each week on Dancing with the Stars that he shot Bristol through his TV? He blasted his Panasonic? Well, I'm thinking, 'Imagine more gun control. Then he'd have to attack his Panasonic with a butter knife.'" - I'm not sure how preventing crazy people from shooting up their TVs makes things miserable for liberals, but I do know that Sarah managed to mention "Dancing With The Stars" at what was basically an anti gun-control rally, and for that I have to give the woman some props.