Anybody Check This Guy's References? 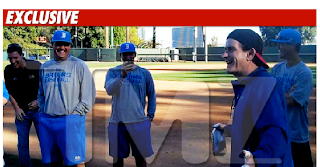 "Stay off the crack. Drink a chocolate milk." - Charlie Sheen, in an anti-drug speech to the UCLA baseball team yesterday. Charlie Sheen in an anti-drug speech? Weeks after he shared a "briefcase full of cocaine" with a posse of strippers and ended up in the hospital? Months after he defended his drug-fueled, hotel-trashing, prostitute-tormenting weekend by saying, "If a guy has one bad night, everybody goes insane and panics. I'm not panicking." That guy? Really? Well, there's only one thing to do in a situation like this. Let's play one of my favorite games! It's called "What's Next?" It's easy. Watch:

What's next? Kim Kardashian speaks to BYU's sororities about being popular without taking your clothes off?

What's next? P. Diddy talks to MSNBC about recession-proofing your budget?

Thanks to Chuckie for the laughs. And mad props to UCLA for what are clearly very high standards. Keep up the good work, people!
Posted by Renée Z. at 7:26 AM