Delusions of Grandeur, Volume One 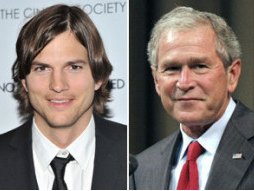 "I don't think he's very happy with me. He just was not very nice to me. He just kind of snubbed me a little bit." - Ashton Kutcher, telling Scott Mills of BBC Radio 1 that George W. Bush "snubbed" him at The Super Bowl. Ashton continued, "I think I said some mean things during the election. I feel like he probably does not like me very much." Oh, that's quaint, Ashy. But let's unpack this. You think that the former President ignored you at a football game because you said some bad things about him during the election? Yeah, because politicians NEVER have to deal with their opponents. Look, I dread W as much as the next lucid human being, but something tells me that the leader of the free world wasn't sweating the guy from "Dude, Where's My Car?" Just saying.

Ashton Kutcher: George W. Bush Snubbed Me At The Super Bowl [HuffPost]
Posted by Renée Z. at 6:23 AM