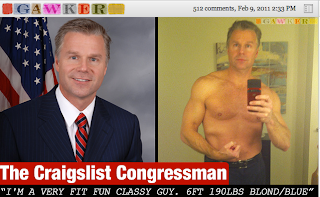 Representative Christopher Lee, a Republican Congressman from New York, resigned last night after Gawker busted him soliciting mistresses on Craigslist. The 46 year-old married politician identified himself on the website as a 39 year-old divorcee looking for a woman friend. And then he sent one lucky lady the shirtless photo you see above. Swoon! As one would expect, Lee supports DADT. Because a lying philanderer is exactly the right guy to decide that your sexuality is problematic. Oh, and he opposes abortion funding, too. Duh. I mean, his shirtless body is available for viewing, so your uterus is fair game too, ladies. In case you wish there were a word or a phrase to describe conservative politicians who preach family values while dismantling them behind the scenes, you're in luck! The late, great Sigmund Freud identified this behavior as reaction formation, a defense mechanism in which one deals with his own "unacceptable" impulses by publicly taking a stand against them. So there's your fancy phrase. Personally, I prefer "douchebaggery" to "reaction formation," but to each his own.
Posted by Renée Z. at 7:46 AM