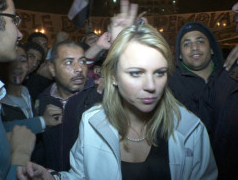 You know what they say about "a few rotten apples," right? That they spoil the most inspirational political event in recent history with brutal sexual assault? Or is that not how it goes? Regardless, CBS News has issued an official statement saying that correspondent Lara Logan was sexually assaulted on Friday while in Egypt covering Mubarak's resignation for "60 Minutes." According to the statement, Logan was amidst the celebration in Tahrir Square when a frenzied mob separated her from her crew. Surrounded, Logan suffered a "brutal and sustained sexual assault and beating before being saved by a group of women and an estimated 20 Egyptian soldiers." Lara Logan is now in a US hospital recovering. Her attack frollows a report in 2005 by The Committee to Protect Journalists that claimed that "journalists in Egypt suffer numerous forms of discrimination including...sexual assault of female journalists."

I don't have anything to add to this. Well, of course I do. Don't I always? I know a few women who report the real news (not the F-Bomb type of news, that is), and one in particular who travels to war zones to do so, and I just want to say that they rock. I'm pretty cozy here behind my laptop whining about Taylor Momsen, but it is never lost on me that there are women (and of course men) out there bravely fighting the good fight to bring fair, balanced, and important information to the masses. And I'm not talking about anyone at Fox News, for the record.