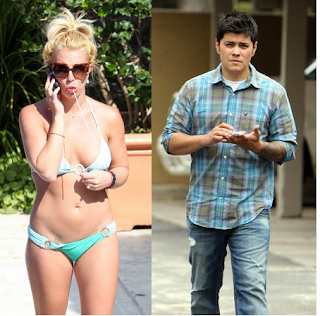 "They are really explicit images that will shock and disgust the majority of her fans." - a friend of Britney Spears's former bodyguard, Fernando Flores, speaking about the nude photos BritBrit (allegedly) sent to his friend. Fernando is suing Britney for $14 million, claiming that she sent him graphic, nude photos from her mobile phone and made numerous "unwanted advances." According to Flores's friend, Brit sent the pics to Flores last April, when she was "coming on to him on a daily basis." The photos "show Britney with the camera between her legs. Others show her in provocative positions wearing lingerie. There are a few where she is naked, exposing herself in a way that she clearly hoped would make him aroused." When I first read this, I thought, "Dude. She also shaved her head and chased a car with an umbrella. Lighten up." But Flores says the pics and advances happened just last year, long after Britney Jean had handed over control of her finances, tied in some extensions, and reeled in the crazy -- which makes his claims either sadder or more suspect. Also, while I hope that a man's sexual harassment claim is takes as seriously as a woman's should be, I doubt a few dirty pics of Brit are worth $14 million. Sure, Flores had to quit, but I doubt he was making $14 million a year, so I wonder how those damages were calculated. Regardless, here's what really gets me about this story: not that Brit might still be cuckoo, not that her bodyguard didn't want some, but that this is not the first time we'll see Britney's not-so-aptly-named "privates." I mean, sorry, Fernando, but "disgusting?" Yes. "Shocking?" Um, not so much. Just saying.