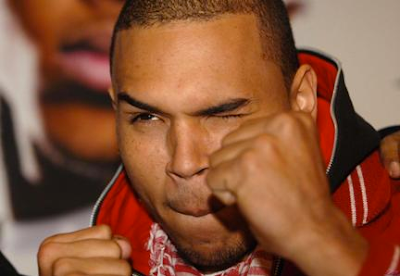 Chris Brown got a standing ovation after his performance on "Dancing With The Stars" last night. Not only did the audience stand up, but the judges did, too. I didn't see it go down because DWTS sends me into anaphylactic shock, and I'm fresh out of epi-pens for the soul. However, I watched the video this morning over at RadarOnline, where his performance is referred to as "dazzling" and "electric" and, I have to ask, a standing ovation for lip-synching? What the fuck? Of course, any show that had abstinence educator and teen mom Bristol Palin shimmying to the musical double-entendre "Momma Told Me Not To Come" is not too concerned with integrity, so let's just move on to Chris himself. Even before his "energetic" set last night, Brown's new album had hit #1 on the charts. So, clearly, if you want to sell records, you should bust a hole in someone's window in a fit of pissy, whiny, no-balls rage. Of course, beating up your girlfriend might do it, too, but you only get to play that card once in a career. I'm glad to see that Chrissy's complete disregard for other human beings isn't affecting his success. I mean, sure, he acts like a misogynistic, clinically narcissistic, out-of-control punk, but he can do back flips and somersaults! In a red tuxedo no less! All is forgiven! DAZZLING!
Posted by Renée Z. at 1:07 PM