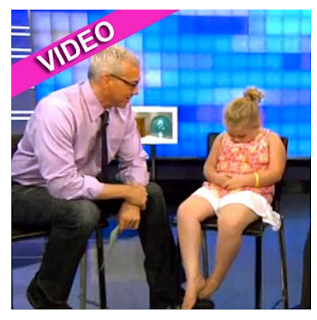 I've been trying really hard to ignore this whole Honey Boo-Boo thing, but leave it to Dr. Drew to make that impossible. Yesterday, Drew interviewed the 7 year-old on his eponymous talk show, and the poor kid resorted to faking sleep to try to communicate to the negligent adults around her that she is fucking tired of being whored out. And just in case that didn't get the point across, when Drew asked Alana (yeah, she actually has a name) if it's hard to be on TV, she answered, "Fans come up to me and I hate it." I'm not going to get into the crime that is this poor girl's parenting, so let's just focus on Drew for a minute. This is the DOCTOR who brought us Celebrity Rehab, a show ostensibly about helping barely famous addicts but that was really about showcasing Drew's abjectly unethical behavior. For the record, four Celebrity Rehab alums have died since taping the show. I guess making worse the lives of long-suffering adults got old for Dr. Pinksy, so he's started profiting from the demoralization of children. I mean, that's the logical next step for anyone in a helping profession, right? I think if Drew teaches us anything, it's that the whole Hippocratic Oath thing is a total joke. Harm, shmarm: let's make some money! Whoot!