They're Coming For Your Title, Kimmie 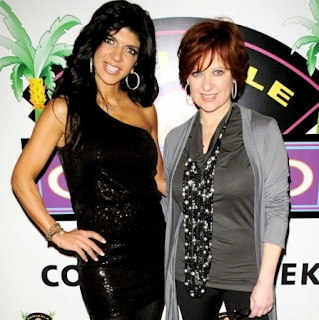 According to The New York Daily News, Real Housewives of New Jersey stars Caroline Manzo and Teresa Guidice were asked to appear at a Halloween party that will raise money for a 6 year-old boy named Christopher DiMartino who has been fighting cancer since he was 3. Christopher will die within months if his family can't raise find a way to pay for chemotherapy treatments -- hence the benefit. However, the whole MONEY TO BENEFIT DYING CHILD part was apparently lost on these two fucking clowns, who refuse to appear unless they are paid their normal $3000-$30,000 appearance fee. Look, I stopped watching all things Housewives a long time ago, not for any real reason unless you count my firm belief that the entire franchise is a harbinger of the apocalypse. So, while I am horrified by this story, I can't say I'm surprised. What is surprising is that anyone would pay $30K -- 0r $3K for that matter -- to catch a glimpse of these barely literate famewhore morons. I mean, a plane ticket to New Jersey costs much less than that, and there you can see a whole state full of assholes. No offense New Jersey, but, you know, if the pathetic bitch fits, blah blah blah.

I understand that we all love seeing women feed into stereotypes and reinforce everything that is wrong with our culture, but, if you watch this show, you're helping support these two and their black souls. That's cool, though. Carry on.
Posted by Renée Z. at 7:24 AM