How Do I Hate Thee, RadarOnline? Let Me Count The Ways 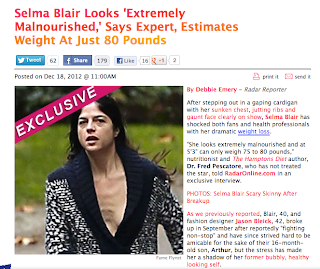 RadarOnline is such a bucket of suck. Today, they ran this photo of "scary skinny" Selma Blair with a story chock full of assumptions -- among them, that she is malnourished, that she weighs 75-80 pounds (an estimate from some asshat doctor who, naturally, "has not treated the star"), and that "the stress [of her divorce] has made her a shadow of her former bubbly, healthy looking self." Oh, where to start. Okay: Yeah, she looks thin. So do 90% of the women in Hollywood, many of whom are deified for their boniness. So there's that. And let's just say, for the sake of the conversation, that in fact the jackasses at Radar are correct, and that Selma has lost weight in response to stress. Guess what isn't going to help her? POINTING OUT THAT YOU THINK SHE LOOKS LIKE SHIT. Or let's just say that it isn't the divorce, and Selma actually is malnourished because she has an eating disorder. Guess what isn't going to help her? POINTING OUT THAT SHE IS TOO THIN. In fact, we call that reinforcement, you idiots. I mean, gee, what could possibly make a woman in Hollywood -- or anywhere else -- think that she needs to keep her weight down? It's such a mystery. This might have something to with it: 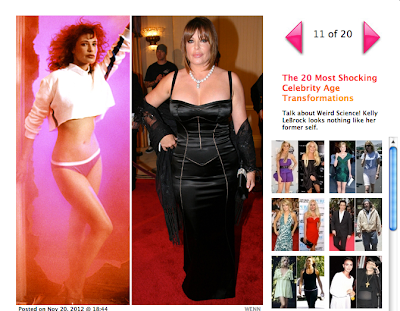 Here is a photo of Kelly LeBrock that Radar ran back in November with the following introduction: "...while some [Hollywood stars] manage to maintain their looks through the years, others haven't been quite so fortunate. From too much plastic surgery to outrageous weight gain, RadarOnline.com has photos of the 20 most shocking celebrity transformations." Indeed, Kelly's weight gain is OUTRAGEOUS! How dare she! I, for one, am definitely outraged. Nothing OUTRAGES me more than watching a woman eat when she is hungry. That shit really yanks my chain. Fortunately, Selma's weight loss is only "shocking" and "scary," so at least Radar has spared her the rage reserved for those who aren't malnourished. So, remember ladies: they're watching. Don't get too skinny, lest we all suffer shock at the sight of your obvious emotional instability -- but don't gain weight either, because, well, that's just, say it with me...outrageous.
Posted by Renée Z. at 1:22 PM