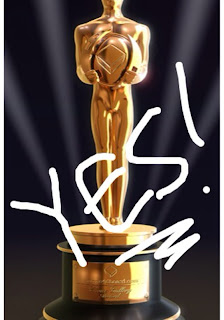 As you probably already know, I will be posting live this Sunday during the Academy Awards broadcast. Even if you’ve never watched the Oscars before, I encourage you to tune in to Swakker Café for the broadcast if for no other reason than to witness the complete insanity that takes me over every year at this time. I have been watching the Academy Awards broadcast since I was 13. That’s a lot of Oscars. I get a little, um, passionate about them, so even if this isn’t usually your cup of tea, I think you’ll have a good time. Check it out.
With this in mind, I am going to use this week’s column to post my Oscar picks. You might not think that this is a big deal. Well, you’re wrong. I mean, I might as well be disclosing CIA secrets. Okay, maybe it is slightly less serious than that. But it’s serious. My friend, V., and I have been betting on the Oscars since we were 15 (Yes, I know. We’re geeks. Fine. But we’re geeks who know a lot about the Oscars). We have a lot of rules surrounding this lifelong competition, among them that our picks must be disclosed to each other right before the pre-show begins. Revealing my picks this early gives V. a huge advantage over me and is an insult to our sacred process, but whatever. I’ll still beat her.  However, because I want to preserve some of our competition’s venerable rules, and because it would take me 7000 iPhone screens worth of words to explain my picks for every award, this column will address only the “Big 6.” So, with no further ado, I present to you my picks for the 82nd annual Academy Awards. Cue drum roll.
BEST ACTOR IN A LEAD ROLE: Jeff Bridges in “Crazy Heart”
WHY: This is what we call “The Body of Work Award.” The BOW award is given to an actor or actress who maybe didn’t give the best performance of the year, but who has given so many good performances that the Academy figures, well, we better give him/her this one. Almost always, the BOW award winner is not the best performance in the group. I think Jeremy Renner should win this award, but my money is on Bridges. Past BOW awards in this category were Paul Newman in “The Color of Money” and Al Pacino in “Scent of a Woman.” And if you saw either of those, you know the award was not for the performance. Trust.
BEST ACTOR IN A SUPPORTING ROLE: Christoph Waltz in “Inglourious Basterds”
WHY: Primarily because everyone is saying he will win. He is the easy favorite. I am worried that this will result in the “Backlash Award,” which happens when the voting members of the Academy get mad because the media is stealing their thunder, so they purposely vote for someone other than the favorite. A recent (ish) famous Backlash victim was Kate Hudson in “Almost Famous” (she lost to Marcia Gay Harden in “Pollock”). But Kate didn’t deserve it anyway, and Christoph does, so I’m sticking with him.
BEST ACTRESS IN A LEAD ROLE: Carey Mulligan in “An Education”
WHY: Well, let me first say that this is a controversial pick. For one thing, Meryl Streep is in the category, and for another, Sandra Bullock has already won the SAG and the Golden Globe. So I am expecting Mulligan to win what we call the “The Split the Vote Award.” Splitting the vote happens when two frontrunners (in this case Streep and Bullock) command such high, nearly equal numbers of votes that they literally split the majority, leaving the highest number of votes to a third contender – in this case, Mulligan. Confused? It’s all algebra, people. Or calculus. Or trigonometry. Or something else I know nothing about. The point is, the SV award is a tough one to predict, but I think it will happen in this category. The most famous SV award of all time was Marisa Tomei’s ridiculous Best Supporting win for “My Cousin Vinnie,” when Vanessa Redgrave and Miranda Richardson split the vote. With all due respect to Marisa, whom I adore, come on. “My Cousin Vinnie???” Vanessa Redgrave? Miranda Richardson? Please. In this year’s case, though, I think Mulligan is a deserving winner. You can imagine how relieved she will be to read that.
BEST ACTRESS IN A SUPPORTING ROLE: Mo’Nique in “Precious”
WHY: Because she has already won the SAG and the Golden Globe for this role, because her acceptance speeches have been inspiring and beautiful and real, and because she kicked acting butt in this role. Basically, because she rocks.
BEST PICTURE: The Hurt Locker
WHY: Because it should win. This is rarely the case with the winner of this category, if you ask me (or even if you didn’t). But this year, I feel strongly that the best film will win, and the best film is this one. Case closed.
BEST DIRECTOR: Kathryn Bigelow for “The Hurt Locker”
WHY: Because the film didn’t direct itself. It’s as simple as that. Plus, it’s a war film directed by a woman, and that just rocks.
So there you have it. Hard science, people. Hard science. As promised, I won’t go into the other 18 awards here. But I assure you I have an equally scientific process for choosing them. I can also assure you that I will beat V. this year. If you’d like to hear the victory unfold, or if you just want some good laughs, tune in to Swakker Café this Sunday from 4 pm (pre-show) until the last award.  Now I have to go practice my victory dance. That’s right, V. You’re going down.
Posted by Renée Z. at 5:34 PM