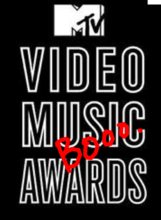 Back in June I wrote a column about The 2010 MTV Movie Awards. Last night, I watched the 2010 MTV Video Music Awards with every intention of writing a new column. And I am going to – for the most part. But since MTV has basically given up on originality and, for that matter, entertainment, it seems unfair that I should expend too much energy on a summary of last night’s snorefest. Plus, you know, I am big into energy conservation. All to say, I am going to open this discussion of the VMAs by quoting myself. Which basically puts me at a Kanye West level of self-adulation, but I guess that’s perfectly appropriate. So let’s begin. As I said in June, “I was born before MTV. Yes, that means that I remember when phones needed cords and cameras needed film. But more importantly, I remember when MTV was awesome…Now, however, it is literally and figuratively a big pile of *&%$.”

And there it is. MTV sucks, and the Movie Awards suck, and the Video Music Awards suck. Sad but true. It’s fair to say that MTV jumped the shark somewhere around the time when “The Real World’s” viewership eclipsed that of “The Top 20 Video Countdown.” To wit, when I turned on MTV at noon on Sunday hoping the station would be showing vintage VMA episodes or even pre-pre-show prattle, I was greeted instead by…wait for it…an all day marathon of “Jersey Shore.” I’m not really sure why MTV even bothers with Video Music Awards, seeing as how they rarely show videos or play music. But because I said I would, I hereby present, in easy-to-follow, outline form, my official 2010 MTV Video Music Awards Wrap Up:

Chelsea Handler: Oh, Chelsea. The media pretty much killed poor CHan today. The New York Times called her “among the worst [hosts] in the show’s history.” The Washington Post said that her performance consisted merely of “a string of flat one-liners that fell a few degrees below crass.” I don’t know; I didn’t think she was that bad. Plus, I mean, “a few degrees below crass” is pretty much Chelsea’s shtick. Were they expecting Michelle Obama? For me, her jokes weren’t the problem – it was her face. Homegirl was sporting enough Botox to paralyze a herd of Justin Bieber fans. Her forehead was so shiny with botulism that even Stevie Wonder needed sunglasses. Get it? He’s blind! So it was really bright! Okay, I’ve done enough damage here. Let’s move on.

Lindsay Lohan, Rihanna, and Taylor Swift: These three young women represent the requisite “surprises” of the evening. First, Lilo mocked her own alcohol problems in a skit with Chelsea. This might have been funny, cool, and surprising if Lindsay weren’t broke; I mean, self-deprecation is an easy sell when you’ve snorted your fortune away. So, no big shock there. Shortly after, Rihanna opened the musical portion of the show -- performing with Eminem -- even though she announced last week that she’d have to skip the awards because of her film schedule. Ooooh! You really fooled us, RiRi! Shocking! Finally, Taylor Swift sang a sweet, barefoot, and off-key song about that whole Kanye West incident. I’ve already addressed this in a “WTF” post, so rather than rehash my TSwiz conspiracy theory, I’ll just say this: um, her... hair looked cute? No, really, Taylor seems very nice, we are all rooting for Lindsay, and Rihanna is cool. But as far as surprises go, these stunts were fake, desperate, and totally predictable. Like JWoww’s cleavage, one might say.

Justin Bieber: Kim Kardashian had the honor of introducing Justin Bieber in the latest installment of “Keeping Up With the Statutory Rape Jokes.” Then Justin B came out and didn't sing. And he didn't sing really, really poorly. I felt kind of bad for him. Clearly, lip synching skills don't come in until facial hair does; what’s a teen to do? Plus, he wasn’t alone in the fake singing category; Usher and Ciara also lip synched parts of their songs -- poorly. That's cool though; it’s not like it’s a show about singers. Jeez. And I don’t want to jump on the Bieber-bashing bandwagon, so I will say that I was impressed with his drumming. Who knew the Biebs had chops? Bless his little heart.

Linkin Park: The alt-rock band performed in a live broadcast from the beautiful Griffith Observatory. I rarely admit this, but I always liked Linkin Park. IN THE NINETIES. I mean, what the f-bomb were they doing there? Um, hey guys! Jerry Seinfeld called. He wants his decade back.

Last, But By All Means Not Least, the Meat Dress: In case you haven’t heard, Lady Gaga won all the awards. But none of her achievements generated more buzz than her decision to wear a dress and shoes made of uncooked slabs of beef. Literally. She wore beef. As a dress. Oh, and also as a hat. Now, look, I used to be a pretty big Lady Gaga fan. But I might never recover from that dress. I was hoping that she was making some sort of statement about wearing fur or leather – you know, like, if you’re going to wear leather, you might as well wear bloody cow flesh. But no. After the show, The Lady explained the dress’s symbolism to Ellen Degeneres. She said, “'If we don't stand up for what we believe in, if we don't fight for our rights, pretty soon we're going to have as much rights as the meat on our bones.” Um…okay. There really are no words to express my revulsion at this particular choice, so let me just say that it’s a damn good thing Victoria Beckham wasn’t there last night. Posh hasn’t had a meal since high school, and I don’t think she could have handled the temptation of all that meat. Imagine? I mean, those would have been some high steaks. Gaga really would have gotten the raw deal there. And I’d hate to see that, since, you know, I have no beef with Lady Gaga. BA-DUM-BUM.

I apologize for the puns. Really. There’s no excuse for those. It’s been a rough 24 hours. I had to concede that my darling MTV may never come back to me, that it has sailed out to sea like so many aging boy bands. What is left of the network is at best tepid and at worst pathetic, and I fear that not even Lady Gaga and her Mad Cow ensemble can save it. Until the network brings back the music and stops the stupid, we are doomed to a future of snores and Snookis. It doesn’t look good, people. I am compelled to paraphrase one of the original MTV VJs, Ms. Downtown Julie Brown: Wubba Wubba Wubba; MTV is in trubba trubba trubba.
Posted by Renée Z. at 7:32 PM