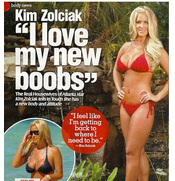 "I had my nipple moved up half an inch, so my boobs were lifted without having a scar from the nipple to underneath the breast...[A week later] I felt a sharp pain in my left breast but didn't realize how serious it was until the bandages came off and there was tear around my nipple." - Kim Zolciak, of "The Real Housewives of Atlanta," to InTouch magazine. I should add that KZo tore her -- say it with me, people -- NIPPLE! on a water slide in the Bahamas. Once you regain consciousness, think about the idiocy involved in throwing yourself down a water park ride one week after having your NIPPLES! moved. At least she won't have that scar, though. Thank goodness. That would be madness.

Photo courtesy of InTouch via HuffingtonPost.com
Posted by Renée Z. at 3:04 PM