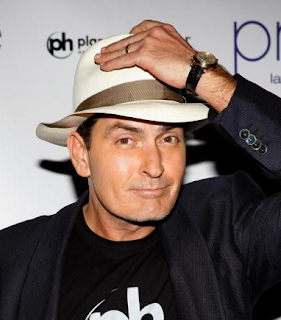 "The story is totally overblown and overplayed as far as the reality of the situation." - Charlie Sheen, in an exclusive interview with Radaronline.com about his cocaine-sniffing, hooker-hiring, hotel room-trashing incident. I know there are some good jokes in here using "blow" and "play," but I'm going to let them go. Plus, the real punchline is at the end of the Radaronline story: "[Charlie] agreed to treatment as part of a plea deal to avoid jail after threatening to kill [wife Brooke] Mueller during a domestic violence incident last Chrsistmas in Aspen, Colorado. Sheen, the highest-paid actor on US TV, is expected to return to work on Friday." I'm not sure how much one can overblow the story of a drug addict father who parties with hookers during a family vacation a year after threatening to kill the mother of his two youngest kids, but, whatever, Chuckie. At least your work won't suffer. Phew.
Posted by Renée Z. at 8:13 AM