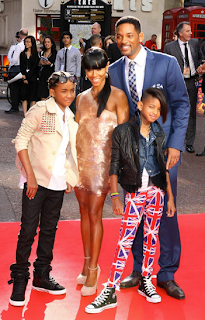 Jada Pinkett and Will Smith are weird. Say whatever you want -- they're weird. They're, like, secret Scientologists, and Will has conspiracy theories, and they're always talking about some sort of sex-related shiz that that you know they don't even do --  and if they do I do NOT want to hear about it. I mean, they're not hard on the eyes, and they seem like nice enough people, but...a little wacky, no? Anyway -- regardless -- their daughter, Willow, is pretty rad. Her first video, for her single "Whip My Hair," was released today, and Willow Smith is a little bad a$$. I mean that in the cool way, not in the Taylor Momsen way. The song is kind of awful, but the video is cool, and Willow is very cool. And she's not Miley! By that I mean that she's fully clothed. Bonus! You can see the video at Gawker TV.
Posted by Renée Z. at 9:14 PM