This Is Not A Joke 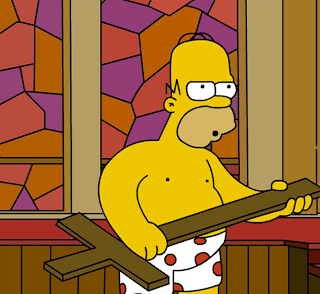 Because the Catholic church hasn't lost enough credibility, the official Vatican newspaper, L'Osservatore Romano, recently issued a glowing endorsement of...wait for it...wait for it...The Simpsons. Says the paper, "The Simpsons are among the few TV programmes for children in which Christain faith, religion, and questions about God are recurrent themes...[the Simpsons] recite prayer before meals, and, in their own peculiar way, believes in the life thereafter." Um, wow. Yeah, so, evidently satire doesn't translate into Italian. It seems someone at the Vatican (I'm talking about you, Pope Benny!) has a thing for Homer and Bart, as this is not the first time L'Osservatore Romano has talked them up. In December, the paper said that the TV show mirrors the "religious and spiritual confusion of our times." Well, someone is certainly confused; that's for sure. You know, this would be pretty hilarious were it not proof that the Vatican is in no position to make decisions for anyone.