If By "Right," You Mean "By A Trainwreck," Then I Agree 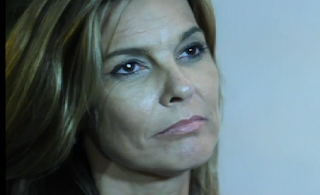 "[Audrina] was raised right...and I don't give a shit...especially Lauren Conrad, piss-ant little fashion shit. If that bitch wants to bring it on, let's go. Let's f**king go... F**k The Hills girls, those tramps. My baby's a star. She's the only one who's got some class." - Lynn Patridge, Audrina Patridge's mom, to reporters outside Beso restaurant last night. Lynn was taking a smoke break during dinner with her daughter and friends following Audrina's elimination from Dancing With The Stars. Yeah, there's no better way to convince the press that your daughter has class than with a drunken, profane, threatening tirade. If you want to hear more of Lynn Patridge's profound prose, you can watch a video of her trash talk here. It's really touching.
Posted by Renée Z. at 1:24 PM