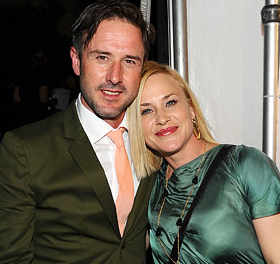 Patricia Arquette had a shitfit last night when reporters at the ONEXONE Foundation Gala in New York asked her brother about his marital problems. Patricia attended the event with David, who recently separated from his wife, Courteney Cox. As one would expect, reporters on the red carpet bombarded David with questions about the separation, which caused Patricia to sprout wings, drop fangs, and yell,

Whoa, whoa, whoa, PArq. Take it easy. It was David, after all, who called into the Howard Stern show to tell the world the intimate details of his sex life with both Courteney and other women. And, um, nobody had asked. In fact, I think I speak for the world when I say that nobody really wanted to know. So let's all calm down, okay, Pat? Jeesh.
Posted by Renée Z. at 8:40 AM