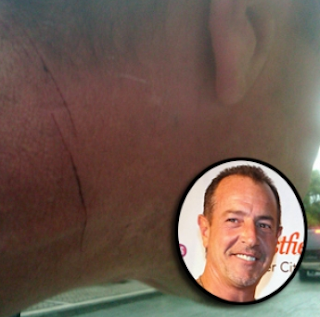 Michael Lohan was allegedly attacked last night outside of his home, where a track-suit clad assailant grabbed him from behind as he stepped out in front of his house. Michael told police that he was jumped by a white man in his 50s or 60s who cut him on his neck with "an unknown object." (See the scratches in the photo above, courtesy of Radaronline.com.) Michael says he then fought off the attacker, sustaining cuts on his hands before the man fled the scene on foot. Hmmm. You might remember that on Wednesday, Michael released a statement to the press that he would no longer speak to the press. Well, he said he would no longer speak to the press about Lindsay or her mom. He didn't say anything about speaking to the press about fake attacks that he stages outside of his house to give him a reason to talk to the press on the very day that Lindsay is in court for her parole violation. JUST SAYING.

UPDATE: 40 hours after promising not to speak to the press about Lindsay, PoLo spoke to the press. About Lindsay. I know. You're shocked. You can hear him here.
Posted by Renée Z. at 9:15 AM