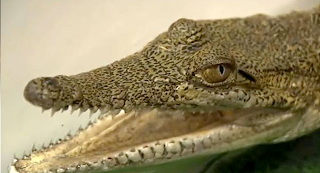 Yesterday a plane crashed in the Republic of Congo and killed 20 people. Awful, right? Yeah. Here's what happened: A passenger on the aircraft was carrying a live crocodile in a duffle bag (he planned to sell the animal). As the plane was nearing its destination, the croc ESCAPED FROM THE BAG and ran around the plane, terrorizing the passengers. The lone flight attendant and all of the passengers ran toward the cockpit, causing a massive weight imbalance on the small plane, which went into a midair spin and crashed into a house. One passenger survived. Oh, and the crocodile survived the crash, but was killed with a machete by a rescuer looking through the wreckage. True effing story, people. So, if you are planning to join the illegal reptile trade, check your bags.
Posted by Renée Z. at 1:23 PM