By "Centered" She Means "Ridiculous" 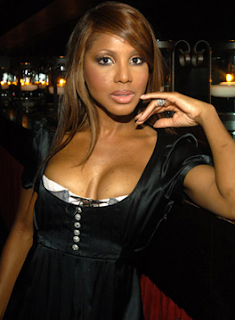 "Toni Braxton's broke - but not broken. A month after filing Chapter 7 bankruptcy again - claiming up to $50 million in unpaid debts - the singer tells UsMagazine.com she's doing fine...'I've just started Pliates classes with a machine and the classes have been helping me feel a little more centered.'" - from UsMagazine.com's story on Toni Braxton's amazing survival skills in the midst of her SECOND bout of bankruptcy. Braxton explains that she and her two young sons are planning a "no-frills" holiday season, with all gifts under ten dollars. In the meantime, Braxton is working hard on attending Hollywood parties. Gearing up for the "Bag Ladies" auction, Braxton says, "I heard there was a Birkin bag they were auctioning off. I have two already, but I kind of want to see."

Pilates classes: $75 a session
Birkin Bags: $30,000 each
Proving to the world that you are a total jackass: Priceless
Posted by Renée Z. at 9:33 AM