I Hope The New York Times Picks Up This Story! 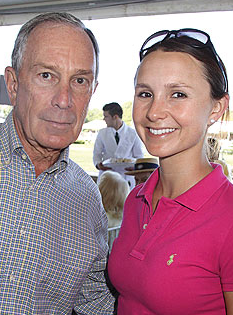 "Mayor Bloomberg's daughter dumped by boyfriend days after fall from horse"- the title of a story in the New York Post. And, no, it's not a Page Six gossip item. It's a freaking INTERVIEW in the NEWS section with Georgina herself in which she whines about her ex, who ended it with her right after she broke a vertebrae after falling off her horse. The 27 year-old millionaire heiress says, "I'm really surprised anyone would be so insensitive as to do it while I am down and out. It was pretty shocking because I thought he was a really nice guy...Anytime you open up to someone and you choose to trust them and include them in your life, and they turn around and say they don't want to be a part of it - that sucks." Yeah, it sure does. You know what else sucks, GBloo? When you open up to someone and choose to trust them and then they use their daddy's governmental post to convince a "newspaper" to let them take up half a page calling you a prick to the world because they're emotionally immature and have no sense of appropriate behavior. Anyway, attention, boys! She's single!
Posted by Renée Z. at 3:24 PM