Stop Playing With Me, Spencer 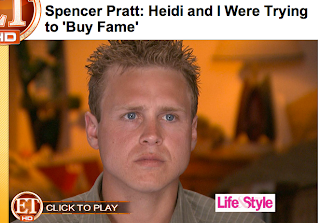 "We were spending more than $100,000 [each month] on clothes, for sure. And we would only wear them once... For me to think I was going to be famous and continue at that level of income on a steady basis was...naive, egotistical, and just foolish...I can't have a long range plan because I'm so hated I don't see anywhere I could go...It's not fair for this sweet, innocent Heidi Montag to be part of Speidi." - Spencer Pratt, in a new interview with Life&Style. Pratt discusses Speidi's financial ruins at length, admitting that he and Heidi were desperate for fame (newsflash!) and blew all their income in its pursuit. It struck me when I watched the interview clip that Spencer sounds...oh man...I'm going to say it...sincere. And then I realized, of course, that this could be as much a publicity stunt as all the stunts before it. Or maybe they have changed. Or maybe it's all a joke. Or maybe Speidi was a joke. Or maybe we're all just part of Speidi's dream and Heidi shot JR and the Man in Black is John Locke. All to say, I was conflicted by Spencer's mea culpa for about five minutes, and then I read an interview with Heidi Montag's mom in People magazine in which she explains that Heidi's young brother, "is eligible at free lunch for school and is proud to take advantage of it." That pretty much puts it all in perspective, no? Suck it, Speidi.
Posted by Renée Z. at 3:57 PM

Email ThisBlogThis!Share to TwitterShare to FacebookShare to Pinterest
Labels: Speidi