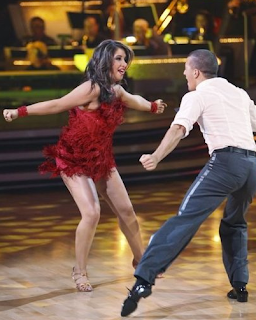 "You may not be a fan of the show or even Bristol but I firmly believe her continued success on the show demonstrates the power of the tea party." - from a member's post at FreeRepublic.com, referring to Bristol Palin's seemingly unwarranted success on Dancing with the Stars. That's right. Bristol's success on a craptastic competition dancing reality show demonstrates the power of the tea party. That should help the rest of us take them more seriously, for sure. Oh, and the post is titled "FReep DWTS! Make liberal heads explode and vote for Bristol Palin tonight you don't need to watch." Is your head exploding yet? What's even better -- or worse (same difference) -- is that, though I may mock, it seems some other non tea-partiers are moved to arms by Bristol's two-step and tango triumphs. Jezebel.com reports that DWTS will be changing its voting system next season because there is such anger over Bristol beating Brandy on Tuesday; Jimmy Kimmel called Brandy's elimination "an outrage" on his show this week; and Brandy's partner Maksim complained to E! News that "this season has just been ridiculous since day one." Because it was not at all ridiculous before this, Max. Not at all. What a bunch of clowns.
Posted by Renée Z. at 9:16 AM