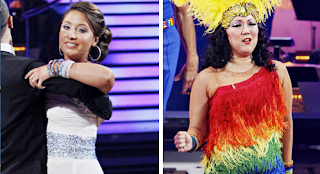 "I heard from someone who really should know (really should seriously know the dirt really really) that the only reason Bristol was on the show was because Sarah Palin forced her to do it." - comedian Margaret Cho, who appeared on Dancing with the Stars with Bristol Palin, in her blog this week. Wait, you mean that Sarah Palin is a cut-throat opportunist who would whore out her own children? No way. And by that I mean "no shit." MCho also alleges that Sarah "blames Bristol harshly and openly" for causing Sarah to lose the election and "so she told Bristol she 'owed' it to her to to DWTS..." Again, I'm shocked. Because when I see a clumsy, insecure, unwed teen mom whose mother preaches abstinence awkwardly dancing on a reality show, I think, "That's gotta be one healthy, fucntional family." Come on now, Maggie; keep up.
Posted by Renée Z. at 11:27 AM