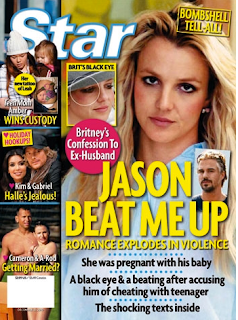 You might have heard by now that Britney Spears's ex-husband, Jason Alexander (to whom she was married for 55 hours in 2004), claims BritBrit told him that her current boyfriend, Jason Trawick, beats her. The raggiest of the rags, Star magazine, broke the story and released an audio clip in which they claim Brit herself tells Jason #1 that Jason #2 "beat on" her and gave her a black eye. Look, I don't want to ignore the possibility of abuse here, but there is no way in hell that it's Britney in the clip. For one thing, she never once says "y'all" and, for another, it sounds NOTHING LIKE HER. Seems to me that Jason #1 needs a little Christmas shopping money and Star is just the piece of crap to give it to him. Ho Ho Ho-ly effing famewhore madness, Batman.
Posted by Renée Z. at 12:16 PM