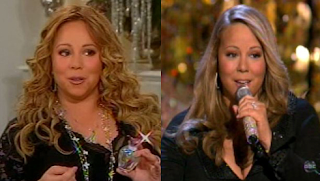 Her Royal Lollipop-Blingness evidently had some sort of Christmas Concert on ABC last night. I didn't watch it, because I have one whisper-thin shred of dignity left, and I'm trying to hold onto in until the new year. Fortunately, the awesome peeps at Jezebel did, and this morning they point out that Mimi was half her actual size on last night's broadcast. I'm not cracking on Mariah's weight; on the contrary, she's a healthy woman pregnant with twins who looks exactly as she should -- in real life. And yet somehow she was much slimmer last night. Take a look. In the photos above and below, the shot on the left is from Mim's recent HSN appearance, where she did not have control of the production, and the photos on the left are from last night's special: 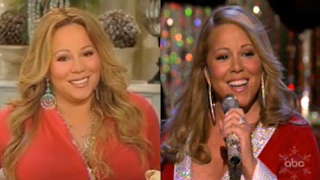 Either she demanded they alter the aspect ratios, or she has the power to change the atomic structure of her own flesh. Having seen "Glitter," Imma guess the former.
Posted by Renée Z. at 8:55 AM