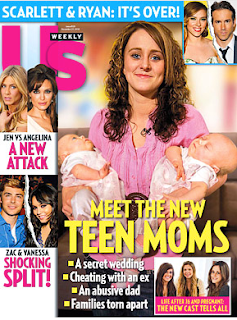 "Meet the Cast of Teen Mom 2!" - a headline today at UsMagazine.com. I tried to ignore this shitstorm of a show the first time around; plenty of others took up the cause of pointing out the insanity of making girls famous for premature pregnancies, so I just covered my eyes and waited for it to go away. It hasn't. And just in case the idea of tuning in to watch girls screw up their lives and get paid for it isn't your cup of tea, Us offers riveting teasers about of two of this season's stars:

Leah Messer: This bubbly cheerleader and her beau Corey Simms had only been dating a month when she discovered she was pregnant -- with twins! The 18-year old Clay, Va. native is now proud mom to Aliannah and Aleeah, 12 months -- but she and Simms broke up after she cheated with an ex.

Chelsea Houska: Mother to Aubree, now 15 months, this 19 year-old from Sioux Falls, South Dakota, clashed bitterly with her ex Adam Lind,. Lind, 19, was MIA for three weeks after Aubree's birth and called their daughter "a mistake." Have they reconnected?

Oooh! I can't wait to learn more about the personification of a major sociological crisis in our country! I hope there's extra neglect, abuse, and self-destruction! Thanks, MTV! Money well spent!
Posted by Renée Z. at 9:48 AM