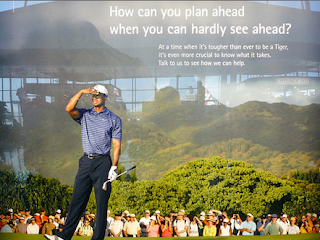 "Because of the time frame of it, I missed my son's first birthday and that hurts. That hurts a lot and I vowed I'd never miss another one after that. I can't go back to where I was." - Tiger Woods in April, explaining the worst part of having been in rehab. Tiger's son's birthday is February 8, by the way, and this year Tiger will be golfing in a Dubai tournament from February 7 until February 13. Oops! Look, el Tigre, what happens in your family is really none of our business -- so stop making it ours by using your toddler son to garner sympathy, you lame f*ck. JUST SAYING!
Posted by Renée Z. at 7:52 AM