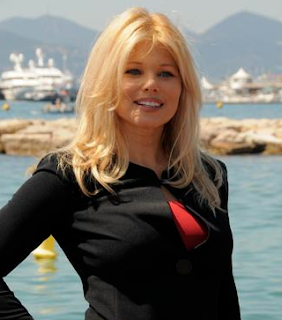 It's only Wednesday, so let's give major props to Donna D'Errico, who used to be on "Baywatch" and was once in Playboy and who is certainly NOT looking to capitalize on a national debate by lying to get herself in the news. Donna D tells The Sun that she was targeted at LAX by TSA agents who could not keep their scanners off her washed up -- I mean super sexy -- self. But that isn't even the best part. Says DD:

"My boyfriend looks more like a terrorist than me or my son and he went through with no problems. The male agent who pulled me out of line was smiling and whispering with two others and glancing at me. I was outraged."

Outraged indeed. At least she had her terrorist-looking boyfriend to comfort her. Oh the humanity!
Posted by Renée Z. at 7:50 AM