Wahler Explains It All 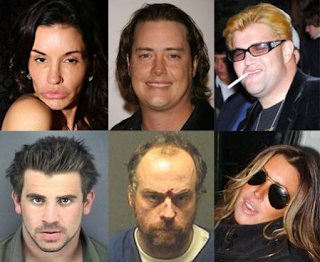 I'm not going to lie. I watch "Celebrity Rehab with Dr. Drew." I have my reasons; you needn't concern yourself with them. Anyway, last night I had poked holes in myself and was marinating in Drew's empathy when Jason Wahler (formerly of 'The Hills," bar fights, and numerous DUIs) emerged from the famewhore background as the Prophet of The Pasadena Recovery Center. Let me set the scene: It's group therapy. Rachel Uchitel, Tiger's $10 million whore, had ditched rehab, leaving Jason Davis (billionaire oil heir and personal hygiene failure), Jeremy London (formerly of "Party of Five" and the recent fabrication that he was kidnapped and forced to smoke crack), Eric Roberts (just a really great actor, unfortunately), and Leif Garett (former teen heartthrob with a devastating heroin addition) in complete despair. Upon beginning the session, Dr. Drew announced that Rachel would be returning. Janice Dickinson (formerly of ANTM and endless public displays of pathology), as if on cue, consequently had a full-on meltdown, half because of benzodiazepine withdrawal and half because she can't bear the attention the boys give Rachel. She was literally shaking and screaming like, well, like a delusional drug addict in rehab. Soon, everyone was yelling, Janice was screeching, Drew was tilting his head and understanding, and the boys were out of their seats in anxious but giddy testosterone-fueled blue-balled impatience, when, in the midst of all the chaos, Jason Wahler came out with this:

"I've been to 8 rehabs and I've never seen anything like this in my life."

And there you have it. Well done, Janice, Rachel, Jason, Jason, Eric, and Leif. Well done.
Posted by Renée Z. at 7:19 AM