What The F*ck Is Going On At The New York Times?! 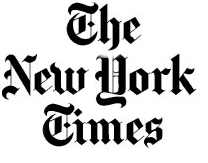 You know, I was just sitting here, trying to have A WEEKEND, catching up on what I thought would be "news," when I read this seriously infuriating shit from New York Times writer Jan Hoffman's piece on Elizabeth Edwards, who, as I am sure you know, died this week after a long battle with breast cancer. Writes Hoffman:

With her warm smile, left-leaning advocacy, generous hips and personal tragedies, this political spouse — wife of a one-term senator who failed twice in bids for national office — became an extraordinary canvas upon which many different public constituencies projected their narratives.

GENEROUS HIPS? What the FUCK (yeah, I said it) is WRONG with you, Hoffman? And what is wrong with The Times? It was only two weeks ago when Dance Critic Alastair Macaulay accused New York City Ballet star Jenifer Ringer of looking "as if she'd eaten one sugar plum too many." Who is managing the newspaper these days? QuickTrim? What's next? "How The Women Of Kandahar Lose Weight After Losing Their Husbands"? Hey, editors, put down the Christmas cookies and do your f*cking job!