Even Charlie Wants Her To Stop Talking 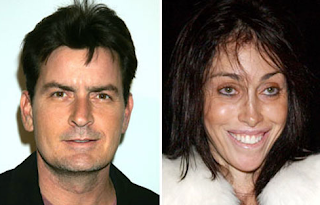 Recovering addict, former prostitute boss, and "Celebrity Rehab" alum Heidi Fleiss has come to Charlie Sheen's defense. According to Heidi, Charlie just likes to party; that's all. The fact that he spent the night trashing a hotel room with a hooker while on a Christmas holiday trip with his young daughters is, evidently, just partying. Also, cocaine doesn't seem to count as a drug in Heidi's world, and she believes Charlie's story that he was only late to his $1.88 million-an-episode job this week because he picked up an ear infection in Vegas this past weekend. Quoth Ms. Fleiss:

“Look, people need to leave Charlie the f*ck alone. Do they really expect him to go to church when he is not working? He is the highest paid actor on television — on a really popular show — and he always delivers by turning up on time and putting in great performances, and that’s all that matters. There is no comparison with Lindsay Lohan because she is not functional and is an addict with a sickness – I should know because I’ve been to rehab several times too. It’s not as if we see Charlie smoking a crack pipe or anything, the guy just loves to party, and people just don’t seem to want to accept that. Also, Charlie is making a lot more money than Lindsay and he should be allowed to spend it whatever way he sees fit. She’s the one that has to try and get her career and life back on track. He’s doing fine."


Wow. I'm really shocked, because I expected the mess that is Heidi Fleiss to make total sense. Good to know Charlie has support from the right people.
Posted by Renée Z. at 1:27 PM