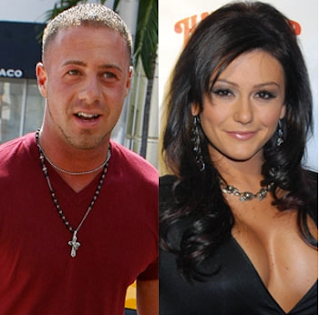 "Before she had her second breast augmentation, she was uneven, scarred, deformed and had tons of cellulite...She is really concerned I'm going to sell nude photos of her. She doesn't want people to see what she looked like before she had all her surgeries." - Tom Lippolis, ex-boyfriend of Jenni "JWoww" Farley of MTV's "Jersey Shore," to RadarOnline. JWoww has taken Lippolis to court to block him from releasing any naked pics he might have. However, Lippolis maintains that he has not tried to market the photos -- because, you know, he's a stand up guy. A stand up guy whose manhood is so insignificant that he needs to tell the world that his ex had cellulite. That kind of stand up guy. Stay classy, Lippy.
Posted by Renée Z. at 8:37 AM