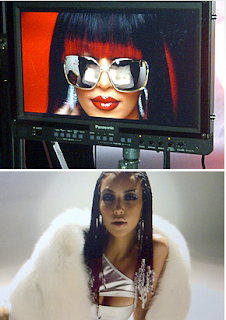 "Get ready for Kim Kardashian, the pop star!" - the first sentence of an article at UsMagazine.com -- it accompanies the video stills you see above. Look, I have been running from this news all weekend. I know KKar played her new single at some unsuspecting Las Vegas night club on New Year's Eve, and I know she has been running around in Bo Derek braids for the last few days after filming her video with Kanye West. Sadly, ignoring it all hasn't made it go away, and KKar is actually going to assault some speakers near you with her krapfest of a song. I suppose the good news is that Kim is actually (sort of) working for a living now. But, you know, then there's the bad news: everything else. Oh, and by the way, Kimmie: JLo called. She wants her Bronx goldigger look back. Just saying.
Posted by Renée Z. at 1:03 PM