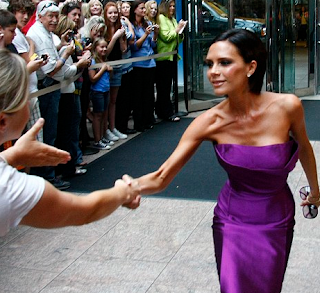 She's eating for one half: Victoria Beckham, she of the protruding collarbone and persistent pout, is pregnant with her fourth child with husband David Beckham. Here's hoping the transition to solid food is smooth for Vicki. [Us]

Oh, well, in that case it's a real tragedy: Blogs are abuzz with the gripping news that Gwyneth Paltrow is the second cousin of Representative Gabrielle Giffords, who was shot on Saturday. The two women have never met. Would it be really gross of me to suggest that Gwyneth's publicist pushed this meaningless fact on the press in order to distract us all from the colossal flop that is Gwyneth's new film, "Country Song"? It probably would be, right? Okay. Then I won't. [Huffington Post]

Someone should tell them that this makes it ten times funnier: Katie Holmes and Tom Cruise were so offended by Anne Hathaway's hilariously perfect impression of Katie on "Saturday Night Live" that they plan to boycott the Oscars, which Anne is hosting. I'm sure their humorless, creepy, robotic, barley-water drinking stiffness will be sorely missed. [Jezebel]

Now it's war: The insufferable suckfest that is "Glee" has crossed the line with one, flying, jazz-handed jeté. The cast will be performing Michael Jackson's "Thriller" on their post Super Bowl episode next month. Oh, and the boys will be wearing football uniforms. Because there is nothing at all sacrilegious about a bunch of insipid musical theater dorks ripping off the greatest music video of all time. NOTHING AT ALL. [Ology]
Posted by Renée Z. at 8:50 AM