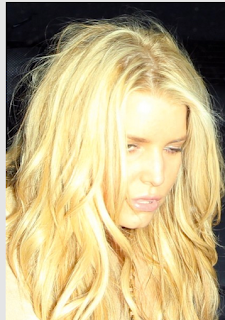 Wasted away again in Margaritaville: Jimmy Buffett is in stable condition at a hospital in Australia after falling from the stage at his concert. Some audience members blame a "huge flash of light" for blinding Jimmy and causing his fall; others believe JBuf was trying to jump from the stage when he misjudged the distance and fell. And SOME people think that there's a wo-man to blame...but he knows it's his own damn fault. [TMZ]

Speaking of people who weren't at all drunk: After pictures and video of Jessica Simpson stumbling out of hip Hollywood eatery Katsuya hit the Interwebs yesterday, a "friend" of JSimp's claims that Jess "had just finished a cleanse and this was the first meal she had eaten in days," resulting in an unexpected sake-to-blood ratio. Mm-hmm. Physically dangerous and overhyped cleanse: $150. Dinner at trendy restaurant: $250. Pounding shots of sake and then pretending to be your own "friend" to make excuses for your booziness: priceless. [The New York Post]

Ohhhh. Then it's not at all offensive: Remember last year when Sandra Bullocks's husband Jesse James was cheating on her with all manner of flora and fauna and then photos surfaced of him dressed as a Nazi? Yes? Good times. Well, Us Weekly has obtained more photos of Jesse celebrating Nazism  -- just in time to punctuate JJ's engagement to the lovely (choke) Kat Von D! But don't get it wrong: Jesse doesn't hate Jews. No, no. An insider explains that "The swastika deal is to scare people. It's part of biker culture." Well, in that case, JJ, please resume mocking the death of 6 million people to compensate for your small penis. Mazel Tov! [HuffPost]

Oh no! Unconditional love! LOOK AWAY! LOOOOK AWAY!!!!! Grocery store chain Harps, which boasts 60 locations in Oklahoma, Missouri, and Arkansas, has blocked the Us Weekly cover photo of Elton John, his husband David Furnish, and their newborn baby son, Zachary, from shoppers' eyes. The store placed a "family shield" over the photo "to protect young Harps shoppers." Thank god. Two people choosing to create and nurture a life together despite unjust societal obstacles is no kind of image for children. Shudder! Hey Harps: F*CK YOU. [Jezebel]

Can't I just hate "Glee" in peace?: Glee's creator, Ryan Murphy, says that he plans to tighten the reins on the show's sexuality out of respect for younger viewers. Speaking about a recent masturbation scene, Murphy told The Hollywood Reporter, "I personally did not think it was too much, but I immediately heard from parents and even my gay friends who were like, 'I wasn't comfortable knowing that my 8-year-old niece in Maryland was watching that. From now on, I will sweat every single word and how we're presenting it...I think all parties involved learned a lesson about how parents look to the show as something inspirational and aspirational. We all realized that we have to be a little more careful when it comes to sexuality." Wait, wait, wait. Is he, like, taking responsibility and accepting accountability and caring about the messages his show sends to kids? Stop it right now, Ryan Murphy. Stop it. Don't go and get all respectable on me. No matter how well you conduct yourself, those musical numbers still make me want to drink bleach. So there. Hmmph. [HuffPost]
Posted by Renée Z. at 8:25 AM