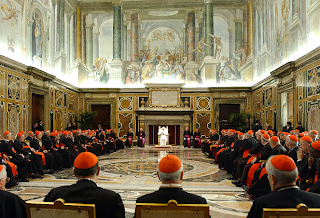 The Associated Press has obtained a 1997 letter from the Vatican instructing Catholic bishops not to report child molestation charges to the police. The late Archbishop Luciano Storeo, who served as diplomat to Ireland under Pope John Paul II, signed the letter, warning bishops they would be fired if they reported to the authorities cases of child abuse. Yeah, um, that's rather incriminating, isn't it? I always feel a little out of the loop where popular religion is concerned, and with all due respect to those more devout than I, I was of the idea that God/Gods -- all of 'em -- generally frown on child abuse. Right? So, it's fair to assume that said God/Gods would, generally of course, also frown on institutionalized protection for pedophile criminals? Or am I crazy? JUST ASKING. Oh, and I guess there's another potential problem. Gah. That pesky sex abuse stuff. See, Pope John Paul II is up for Sainthood, and this letter might throw a little wrench in the canonization plans. Bummer. Sorry, dude. But, you know, GENERALLY, saints don't have massive molestation cover-ups on their hands. JUST SAYING.
Posted by Renée Z. at 8:58 AM