We Don't Need Gun Control -- Not At All 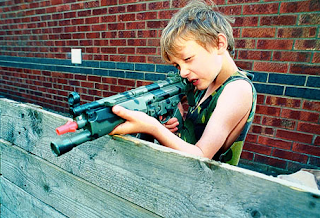 "A 14-year-old South Carolina boy used the rifle his father bought him as a birthday present to shoot the man to death, along with a great-aunt, and critically wound his grandmother, police said Tuesday." - the first paragraph of a report from CNN. And that paragraph pretty much tells the whole story. The boy, who has no record of behavior problems, had no explanation for the shooting and will face charges of murder and attempted murder. Um...WHO THE FUCK BUYS A FOURTEEN YEAR-OLD A RIFLE?????

Not convinced yet? Moments before I read this article, CNN reported that a student in Gardena, California brought a gun to school in his backpack, dropped the backpack, and accidentally shot two students. Because, you know, sometimes one needs to bust a cap in geometry class. But guns aren't a problem in this country. Plus, this is exactly the kind of bearing arms that the 2nd amendment refers to. Exactly.
Posted by Renée Z. at 1:19 PM