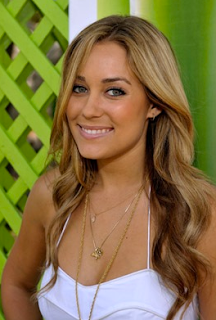 “We sold a show to MTV, filmed it and are really proud of the final result. MTV felt the subject matter was too high brow for their audience and offered me the opportunity to change the show by incorporating more of my personal life. We agreed going into the project that this show would be an aspirational one, focusing on my career and my goals and not my personal relationships. We delivered the show that we sold and are sorry MTV didn’t feel their viewers were savvy enough to appreciate it.” - Lauren Conrad's official statement to Us Weekly about the cancellation of her newest reality show. Here's the thing about LC: despite the fact that she was the central character on "The Hills," the MTV show responsible for bringing Speidi into our lives (and coincidentally, for affirming that MTV viewers want low-brow, un-savvy crap), she seems like a nice, healthy girl. Seriously. I mean, I'd rather go to the dentist than watch a show about her career aspirations, but I have to hand it to Conrad for this statement. I love everything about it. You can imagine her relief. Carry on, LC. Carry on.
Posted by Renée Z. at 8:55 AM